The development of an efficient shell element has gathered a lot of work since the beginning of structural finite element history. For multiple reasons, developing an effective shell element is not an easy task, and we will cover some of these reasons through this article. Multiple shell elements are available in the literature, and they are still being improved as time goes on. For this article I have decided to introduce the MITC shell element (Mixed Interpolation of Tensorial Components) because it recently received new improvements making it one of the most practical and efficient shell element. After detailing the various assumptions and how they work together, I will explain how to derive the shell element stiffness matrix. Finally, I will conclude this article with an example of an hyperboloid-like model simulated using the SesamX finite element analysis software (implementing the element presented here).

There are 2 main kinds of shell element depending on their underlying geometry: quadrangular and triangular. In this article I will focus on the MITC4 element (quadrangular) because it is the most widespread among the MITC shell family.

This article is mainly inspired from the following papers about the MITC4 element. They are great resources to consult if you are looking for deeper information about this element.

Before starting, let’s define some notations that are used through this article:

The shell element is intended to analyze thin structures undergoing forces and moments in any direction. The structure can be flat or curved but it should have one dimension smaller than the other 2. For instance, it is the perfect element to analyze a slab or an aircraft fuselage.

To fully define the shell geometry, the element needs the following 3 characteristics:

The mid-surface and thickness are what comes naturally in mind when thinking about shells.

The director vector is a specific MITC feature. It allows to control how the “cross section” is tilted relative to the mid-surface.

Theses features make it possible to modelize shells with varying thickness along the mid-surface, as well as arbitrary shells connections.

Furthermore, this element is not restricted to flat shell and can also represent curved geometries. The element is meshed on the mid-surface using 4 nodes. At each node $ I $ the following quantities are available:

In essence, the shell element is a simplification of a more complex 3D structure. When designing such an element, the aim is to decrease the computational cost, while making relevant assumptions on how the element behaves. The main kinematic assumptions underlying the MITC element are given here with some explanations.

As the shell must be able to sustain transverse and plane loading, the stress state must allow for transverse shear stress, as well as in plane stress. It is then sufficient to enforce:

Before detailing the kinematic assumption, we need to define a convenient parametric coordinate system on the shell.

We rely on the position vector to define the parametric system. Without providing more details, the first 2 coordinates $ r $ and $ s $ can be any of the mid-surface curvilinear coordinates. The last coordinate $ t $ is such that for a given $ r $ and $ s $ , $ t $ evolves when we move along the director vector.

Using these parametric coordinates, we can describe the position of every point in the space:

Using the position of the nodes and the shape functions we have:

Where the shape functions $ N^I $ are:

Which yields the full expression of the position from the parametric coordinates:

Next we express the displacement vector at each point inside the shell, relative to its parametric coordinates. We have:

And after interpolation from the values at the nodes:

Before going further, let’s define and summarize the different basis and coordinate systems that are used while deriving the stiffness matrix.

We have defined previously the parametric coordinate system ($ r $ , $ s $ , $ t $ ). It is time now to give the associated covariant basis. Using (2), this basis is defined as:

In a sense, the covariant basis “follows” the geometry of the element. Therefore, it is used to compute specific strains inside the element.

We will also use the contravariant basis associated with the previous covariant one. It is defined as follow:

The local basis is used to express the stress strain relation for the shell. The stress assumption given in (1) applies in this basis. While the local Cartesian coordinate system is used to integrate the virtual work over the element volume. 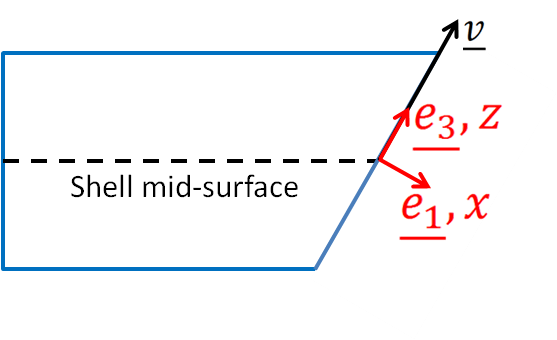 The biggest challenge regarding shell element design is to avoid shear and membrane locking, namely the tendency of the element to represent too rigidly shear and membrane motions. Multiple techniques have been employed to alleviate this issue, each having its pros and cons. Regarding the MITC, this issue is tackled without adding extra degree of freedom or instability to the element. Which makes it an efficient and conceptually simple shell element. 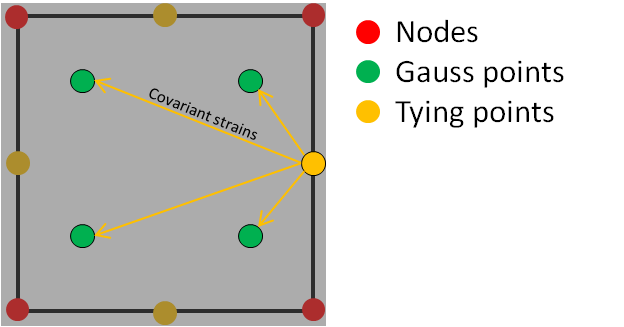 The strain tensor can be expressed in whatever basis we choose. To go on with the MITC procedure, we need to express the strains in the contravariant basis to get the covariant strain components. Then the tying procedure is applied on some of these terms to improve the element behavior.

From definition, the covariant strains components are given by:

And it can be shown that:

Using (4) we can simplify further this expression:

Where the displacement and rotation vectors (through $ \underline{\phi} $ ) appear more clearly. We note that $ \widetilde{\varepsilon_{tt}} = 0 $ because by definition $ \underline{\phi} $ is perpendicular to $ \underline{g_t} $ . The relations given here are valid for an arbitrary point inside the element. Next step is about modifying these terms from their values at the tying points. 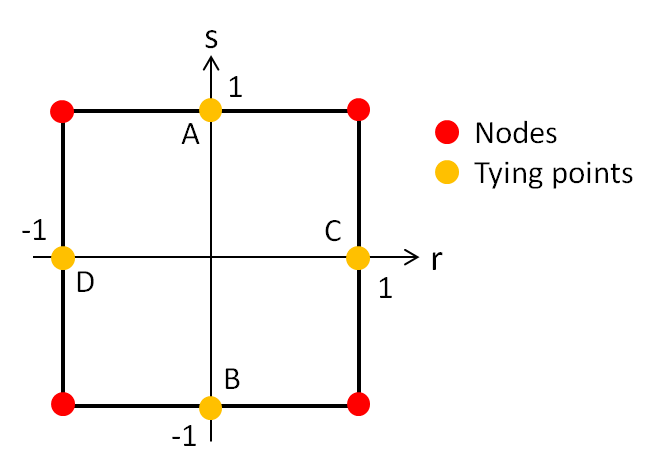 The last step is then to project the covariant strain components into the local basis (8). Expressing the strain tensor in the contravariant basis on one hand and in the local basis on the other hand we have:

To relate the stresses to the strains we need to apply Hooke’s law for linear elastic material.

Note that this material law is applied on strains and stresses expressed in the local basis (where $ \underline{e_3} $ is not necessarily perpendicular to the mid-surface). Using assumption (1) on the right hand side, as well as the result we got in (10) on the left hand side, leads to a peculiar relation:

As for the truss element and beam element, this relation cannot hold. However using a similar explanation, we can find a way out. When making the kinematic assumption we were interested in the macroscopic behavior of the shell. Whereas the stress assumption relates more to a microscopic behavior. It turns out that even if $ \varepsilon_{33} $ is not 0 (microscopic scale) its effect on the displacement (macroscopic scale) is negligible compared to what comes from the other terms. Of course, this explanation becomes questionable as the thickness of the shell increases.

We can therefore simplify this relation and write:

It can be shown that the Jacobian matrix is directly given by the covariant vectors components expressed in the local basis:

Where $ \lbrack g_i \rbrack $ represents the components of the vector $ \underline{g_i} $ in the local basis.

Besides, it can be shown that as long as the $ \lbrack g_i \rbrack $ are components of vectors in an orthonormal basis, we have:

Hence after expanding (11) we get the following expression:

Unlike classical shell or plate element, we cannot in general “pre-integrate” along $ t $ this volume integral because the dependence on $ t $ is arbitrary. We simply apply a numerical integration over $ r $ , $ s $ and $ t $ . The 2 x 2 x 2 Gauss rule is enough to integrate exactly along $ r $ and $ s $ , and has proven to be accurate enough to integrate along $ t $ for most applications (even though we cannot ensure an exact integration).

Remark: In the specific case where $ h \underline{v} $ is constant over the element, we have seen that $ \underline{g_r} $ and $ \underline{g_s} $ no longer depend on $ t $ . This makes it possible to integrate exactly along $ t $ without requiring numerical integration.

Eventually, using (10), we can relate each of the terms obtained to the nodes displacements and rotations and recognize the expression of the stiffness matrix.

As an example, the following hyperboloid-like model is set up and simulated with the SesamX finite element software.

The mesh is voluntarily distorted and curved (the quads are not planar). This mesh can be qualified as a bad mesh, however it is useful to showcase the robustness of the MITC4 shell element.

This case is then solved with a linear static resolution.

And the following figure illustrates the displacement of the model.

To reproduce this simulation on your own, you need:

If you are looking to extend this example, you can get help from the SesamX documentation.

I hope this article has provided you a better understanding of the shell finite element. If you are looking for more information, do not hesitate to send me and email.

Register to our newsletter and get notified of new articles